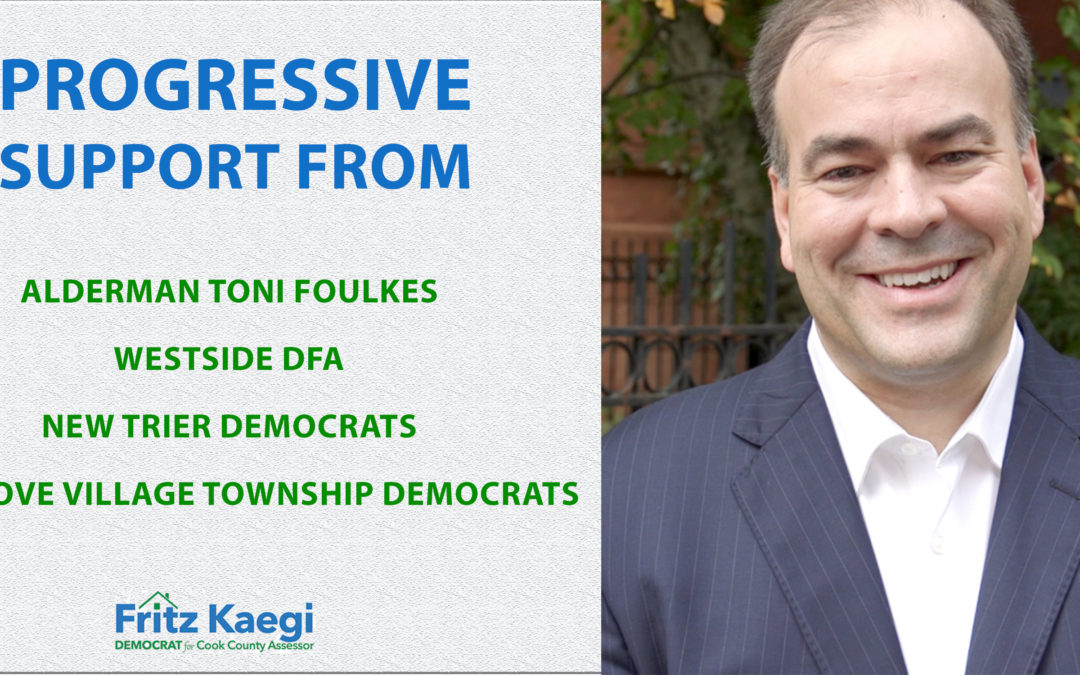 “The current Assessor’s office has held the working class residents of Cook County under its crooked thumb for far too long. We need an Assessor that brings fairness and integrity to the office, and that’s exactly what Fritz Kaegi will do,” Ald. Foulkes added in a statement. “My constituents in the 16th Ward are concerned that gentrification is coming down the pipeline and voters are deeply afraid they will be taxed out of their homes. It’s time to say no to an Assessor and a system that overtaxes people in communities like mine. No more! Fritz is what we need to restore integrity and a good faith environment to the office.”

The Westside DFA, a local offshoot of the national Democracy For America political action committee, said, “For too long, minority communities have suffered under a property tax assessment system that caters to the wealthy and well-connected while leaving the working class to take on an unfair property tax burden.  Under Assessor Berrios, we have seen unprecedented levels of systemic economic devastation on the west side.  It’s time for a change.

“Our organization is committed to building the progressive movement here in Cook County by encouraging and supporting the development of more grassroots leaders, so it’s imperative to elect a new leader who will uphold the trust of the residents.  We need progressive leadership in the office and Fritz Kaegi represents the kind of leader that we need now.”

Additional support for Kaegi, a first-time candidate who has been endorsed by Congressman Danny K. Davis, Congresswoman Robin Kelly, Congressman Bill Foster as well as Cook County Clerk David Orr, Cook County Commissioner Chuy Garcia, and the grassroots progressive group Our Revolution Illinois, among others, comes from the Elk Grove Township Democrats, a community group dedicated to the promotion of democratic principles and candidates for local, Illinois and national politics.  In a statement, the group advised, “Our organization endorses Fritz Kaegi’s campaign for the Cook County Assessor’s office.  The current property tax system targets working class families in our communities, creating an unfair economic burden that many may never recover from.  “We are in need of leadership that will put the residents of Cook County first instead of catering to the wealthy and big corporations.  Fritz Kaegi is a professional, and that is what the Assessor’s Office needs. We know Fritz can get us back on track.”

Adds Kaegi, “As today’s endorsements indicate, support of our campaign is indicative of Cook County’s incredible diversity. Our campaign’s commitment to deliver ethical, transparent and fair assessments resonates broadly. The current Assessor has failed the residents of Cook County for years.  It’s time to clean up the office and provide the taxpayers with a property tax assessment system that they can believe in.”

In related news, on Sunday, the New Trier Democrats also endorsed Kaegi’s campaign during its endorsement meeting.  The group is comprised of local activists and volunteers from the New Trier Township area, which includes Wilmette, Kenilworth, Winnetka, Northfield and parts of Glenview.